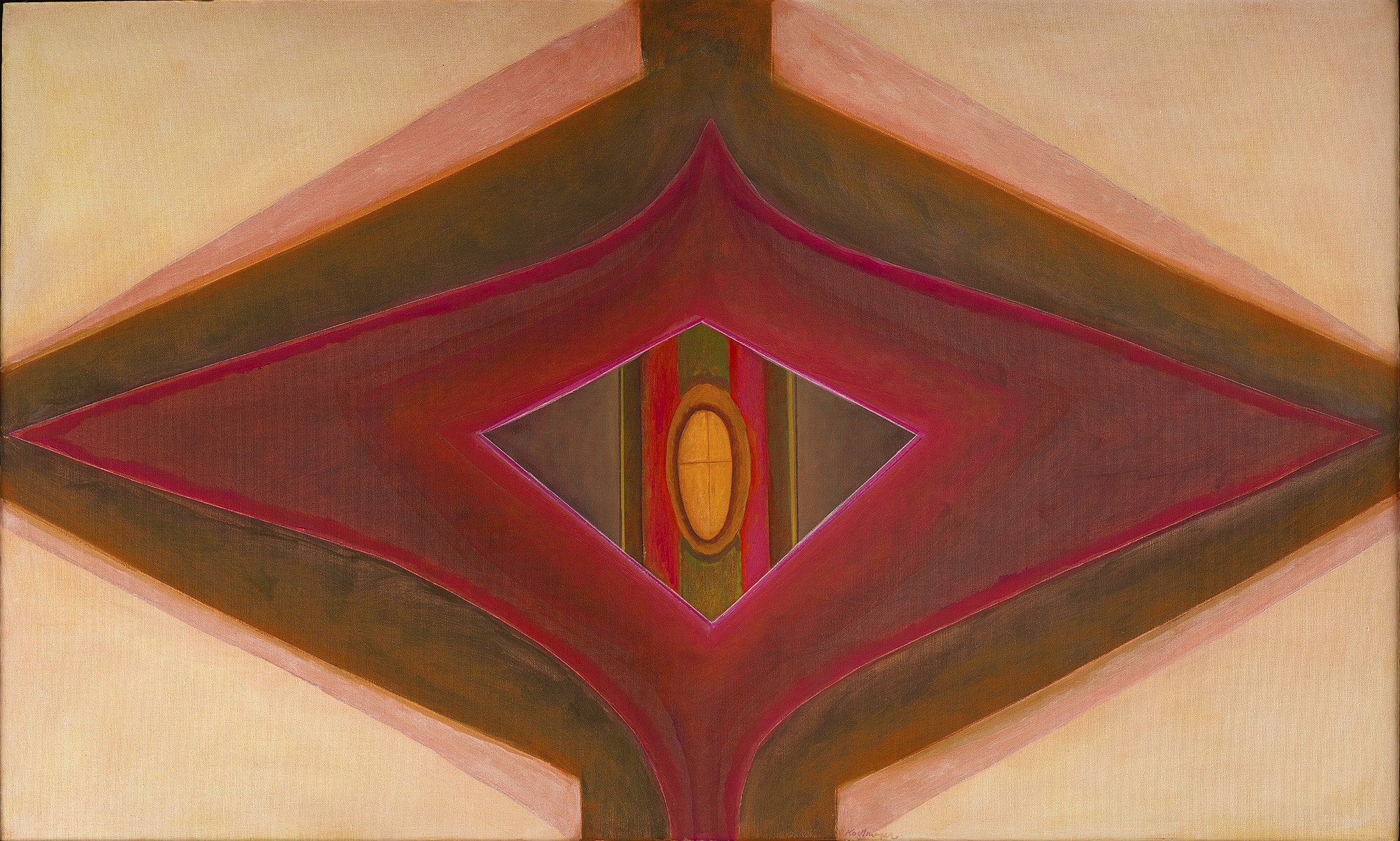 NEW YORK, NEW YORK, FEBRUARY 27, 2020—Berry Campbell is pleased to announce a rare exhibition of paintings and sculpture by Ida Kohlmeyer (1912-1997) from the late 1960s. While known for her unique hieroglyphic painting and sculpture from her later career, Kohlmeyer’s work in Berry Campbell’s current exhibition introduces an organic geometry, recalling the work of Georgia O’Keeffe, Agnes Pelton, and Hilma af Klint.  This is Berry Campbell’s first exhibition of Ida Kohlmeyer since the announcement of the representation of her estate in 2019. Ida Kohlmeyer: Cloistered opened on March 19, 2020 and is ongoing.

Represented in important museum collections across the country, Ida Kohlmeyer had a remarkable Abstract Expressionist pedigree that superseded her renown in her native New Orleans.1

Kohlmeyer received her Bachelor of Arts in in English in 1933 from Tulane University’s Newcomb College. She subsequently studied art, enrolling in John McGrady’s art classes in the French Quarter. She then returned to Newcomb under the influence of abstractionist Patrick Trevino. At the time, Muriel Bultmann Francis, the storied generous patroness of the arts in New Orleans, was inviting Abstract Expressionist masters to come to New Orleans to teach. Among them, Clyfford Still took an interest in Kohlmeyer’s work and recommended that she continue her training under Hans Hofmann in Provincetown. Kohlmeyer completed her master’s degree in Fine Arts in 1954. In 1956, she arrived in Provincetown, where she participated in the last two years that Hofmann was active there as a teacher. His lessons were an awakening for Kohlmeyer. She cast aside the carefully constructed figural compositions she had been creating and adopted an Abstract Expressionist vocabulary of gestural marks and surface tensions in the manner of her teacher. Later, when Mark Rothko moved his family to New Orleans to teach at Newcomb, Kohlmeyer was already a professor, and she arranged for him to rent her family’s house and use her garage as his studio. The two got to know each other, and he became an important mentor to her.

Kohlmeyer began showing her work in 1959, and in 1961, she was included in an exhibition curated by the noted art critic Clement Greenberg that was held at the Oklahoma Art Center in Oklahoma City. In 1960, her work was featured in solo shows at the Ruth White Gallery in New York and the Henri Gallery in Washington, D.C. In the following years, she had solo shows at many museums, including the Columbus Museum, Georgia; the Fort Wayne Museum, Indiana; the Greenville County Museum, South Carolina; the High Museum, Atlanta; the Montgomery Museum of Fine Arts, Alabama; the Mississippi Museum of Art, Jackson, Mississippi; the New Orleans Museum of Art; the Sheldon Memorial Art Gallery, Lincoln, Nebraska; and the Turman Gallery, Indiana State University. In October of 1983, Kohlmeyer won a $1,000 purchase prize in the Eighteenth Southeastern Annual Exhibition at the High Museum. From 1983 to 1985, an exhibition organized by the Mint Museum in Charlotte, North Carolina, entitled Ida Kohlmeyer: Thirty Years, traveled to museums throughout the South. In 2004, the Newcomb Art Gallery at Tulane, organized a large retrospective of her work, entitled Systems of Color. In 2016, she was included in the catalogue for the landmark exhibition, Women of Abstract Expressionism, published by the Denver Art Museum.

In the mid-1960s, Kohlmeyer developed a style strongly influenced by the art of Rothko, consisting of large, floating elliptical shapes with softened edges. Gradually she allowed gestural movement to emerge, enabling her to go beyond “classical placidity” to achieve a freer mood.2 In the late 1960s, she developed a new mode in which organic forms are contained within geometric frameworks. These works from 1968 to 1969 have titles relating to their undulating geometric forms like “Arrowed” and “Cloistered.” They are suggestive of works by Agnes Pelton and Georgia O’Keeffe, but their depth and movement reflect Hofmann’s continued inspiration. The geometric shapes are reminiscent of Hilma af Klint.  In addition to the two-dimensional paintings, Kohlmeyer created shaped sculptures made out of wood or Plexiglas with painted patterns on the canvased surface.

Kohlmeyer explored the nude in several works of 1970 and 1971. Subsequently returning to abstraction, she moved away from a gestural approach, creating works consisting of stacked and striated lines of vivid color in geometric but not rigid arrangements. These works evolved into her Clusters series, featuring rectangular shapes in consistent sizes that float against a grid comprised of their surrounding space. She introduced into them an element of Surrealist automatism, derived from her long-held admiration for the work of Joan Miró. The series culminated in works with checkerboard-like formats, in which each square contains an inventively and freely rendered shape with symbolic associations.

Kohlmeyer also drew on non-Western art. By the late 1970s, she had amassed a large collection of pre-Columbian, Mexican, and African sculpture. However, she did not copy from her sources, but instead incorporated their “honesty and directness” into her work as a means of seeking a mode of expression free of the lessons of her formal training.3 Ann-Sargent Wooster commented in Art News in 1976: “All of the paintings have a kind of Abstract Expressionist freedom, but the shapes and semi-automatic brushwork are set into a sure and complex matrix. It is a pleasant surprise to find someone who can bring so much vitality and originality to this style of painting.”4 The Clusters included a Circus series variation, wherein the shapes verge on recognizable imagery, but need also to be read in the context of their formal relationships. While critics began to refer to these works as pictographs—in the mode of works by Adolph Gottlieb and Mark Rothko from the mid-1940s—they continued to reflect Kohlmeyer’s desire to rein in her natural tendency toward an unfettered sense of movement.

The Clusters series was followed by the Synthesis paintings of the early 1980s, in which she abandoned the grid and allowed geometric shapes to float in watery, atmospheric spaces, again evoking Hofmann’s legacy. In a variation termed the Mythic series, she introduced a new symbolic element in forms suggestive of balls, arrows, and architectural and landscape motifs. She brought together strands of her earlier art in her late paintings of 1990 through 1997, depicting her distinctive semi-abstract hieroglyphic symbols and signs in complex spatial relationships. By the late 1990s, she had adopted a new flatness arranging bolder, brighter more clearly defined forms in arrangements that are either open or gridded. She enlarged the scale of her paintings to incorporate the larger size of her glyphs and symbols. Stronger in their patterns and more decorative, in their relation to the pictorial space, these works have been related to the New York-based Pattern and Decoration movement begun by a group of artists in the early 1970s, including Valerie Jaudon, Joyce Kosloff, Miriam Schapiro, and Kohlmeyer’s friend, Kendall Shaw.5

Kohlmeyer’s inventive and colorful sculptures also brought her acclaim. She first experimented with sculpture in the late 1960s, rendering works related to her geometric paintings of the time, in which physical forms continue the energies of their painted surfaces. In 1977 she created a large installation entitled Louisiana Prop Piece, with her former student, Lynda Benglis, for an exhibition at the New Orleans Museum of Art entitled Five from Louisiana. She subsequently rendered soft sculptures, made from silkscreen fabrics that were bundled or loose and set in plexiglass boxes. Her sculptural work progressed significantly in the early 1980s. Inspired by the work of George Rickey, she began working with professionals who helped her execute her ideas in three-dimensional form. She turned emblematic shapes—similar to those in her paintings—into asymmetrical, playful forms with strong lines and decorative properties that suggest the influence of Miró’s biomorphic Surrealism, the movement of Abstract Expressionism, and the spatial complexities in her paintings.

During the 1990s, Kohlmeyer was represented in several exhibitions that acknowledge her place in the art of her time. In 1990–91, she was included in Four Centuries of Women’s Art, organized by the National Museum of Women in the Arts, which traveled throughout Japan. In 1992, she was featured in a three-person show entitled The Feminine Perspective, with Benglis and Clyde Connell, that was held at the Masur Museum, Monroe, Louisiana. In the same year, she was included in The Feminine Perspective, at the Montgomery Museum of Fine Arts. Over the course of her long career, Kohlmeyer sought to channel her innate proclivity toward spontaneity, even exuberance, with her need for a sense of structured containment that was yet not overly confining. She continued to work with zest and devotion until the end of her life.

ABOUT THE GALLERY
Christine Berry and Martha Campbell have many parallels in their backgrounds and interests. Both studied art history in college, began their careers in the museum world, and later worked together at Spanierman Gallery in midtown Manhattan. Most importantly, however, Berry and Campbell share a curatorial vision.

Both art dealers developed a strong emphasis on research and networking with artists and scholars during their art world years. They decided to work together, opening Berry Campbell Gallery in 2013 in the heart of New York's Chelsea art district, at 530 West 24th Street on the ground floor. In 2015, the gallery expanded, doubling its size with an additional 2,000 square feet of exhibition space.

Highlighting a selection of postwar and contemporary artists, the gallery fulfills an important gap in the art world, revealing a depth within American modernism that is just beginning to be understood, encompassing the many artists who were left behind due to race, gender, or geography-beyond such legendary figures as Pollock and de Kooning. Since its inception, the gallery has been especially instrumental in giving women artists long overdue consideration, an effort that museums have only just begun to take up, such as in the 2016 traveling exhibition, Women of Abstract Expressionism, curated by University of Denver professor Gwen F. Chanzit. This show featured work by Perle Fine and Judith Godwin, both represented by Berry Campbell, along with that of Helen Frankenthaler, Lee Krasner, and Joan Mitchell. In 2019, Berry Campbell's exhibition, Yvonne Thomas: Windows and Variations (Paintings 1963 - 1965) was reviewed by Roberta Smith for The New York Times, in which Smith wrote that Thomas, "... kept her hand in, adding a fresh directness of touch, and the results give her a place in the still-emerging saga of postwar American abstraction."

In addition to Perle Fine and Judith Godwin, artists whose work is represented by the gallery include Edward Avedisian, Walter Darby Bannard, Stanley Boxer, Dan Christensen, Eric Dever, John Goodyear, Ken Greenleaf, Raymond Hendler, Jill Nathanson, John Opper, Stephen Pace, Charlotte Park, William Perehudoff, Ann Purcell, Mike Solomon, Syd Solomon, Albert Stadler, Yvonne Thomas, Susan Vecsey, James Walsh, Joyce Weinstein, Frank Wimberley, Larry Zox and Edward Zutrau. The gallery has helped promote many of these artists' careers in museum shows including that of Bannard at the Institute of Contemporary Art, Miami (2018-19); Syd Solomon, in a traveling museum show which culminates at the John and Mable Ringling Museum in Sarasota in 2020; Stephen Pace at The McCutchan Art Center/Pace Galleries at the University of Southern Indiana (2018) and at the Provincetown Art Association and Museum (2019); and Vecsey and Mike Solomon at the Greenville County Museum of Art, South Carolina (2017 and 2019, respectively); and Eric Dever at the Suffolk Community College (2020).

Collaboration has been an important aspect of the gallery. With the widened inquiries and understandings that have resulted from their ongoing discussions about the art world canon, the dealers feel a continual sense of excitement in the discoveries of artists and research still to be made.

Berry Campbell is located in the heart of the Chelsea Arts District at 530 West 24th Street, Ground Floor, New York, NY 10011. The gallery is open by appointment only. For information, please contact Christine Berry or Martha Campbell at 212.924.2178, www.berrycampbell.com, or info@berrycampbell.com.